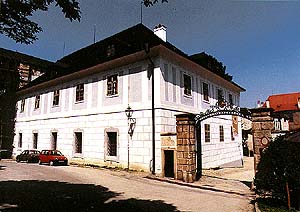 Location :
The Renaissance House is located on the Vth Courtyard of Český Krumlov Castle, where it sits against the western wall of the Castle Theater in Český Krumlov. It thus closes the complex of castle buildings from the side of the castle gardens (see Castle Gardens in Český Krumlov).

Description :
The building is divided into two wings. The smaller court-wing is oriented towards the south while the larger, single-story, wing towards the south. The entire structure is covered by a hipped roof with dormers. The building itself has no basement, but does provide access to the former wine cellars which are located away from the building.

Historical building development :
The oldest part of the building is the ground floor wall which faces the castle gardens - this used to be Gothic fortifications from the first half of the 15th century. 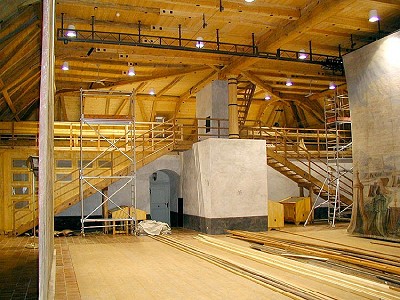 The ground floor also houses a spacious Baroque horse stable with barrel vaulted ceilings. Other areas of the ground floor which are also Baroque, excluding the northern wing, are also of Renaissance origin, and have vaulted ceilings. The first floor was considerably changed during the last, Rococo, reconstruction. Only in the southern part do we find three Rococo rooms with preserved original murals. The attic space was also lifted and reconstructed, thus enabling the Connecting Corridor to pass through from the castle to the gardens.

Significant architectural details :
The single most significant architectural element are the Baroque stables themselves. At the center window we find a richly ornamented water trough which is undoubtedly originally Baroque. The wall on the opposite side of the stable is regularly divided by 22 niches with stone-sculpted mangers. 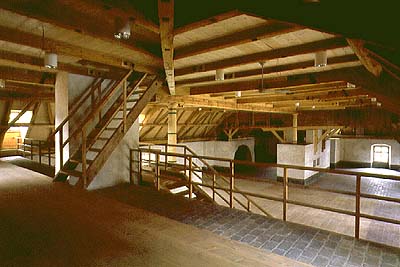 History of the inhabitants :
The original use is unkown to us, as is the actual date of origin of the building. It is certain, though, that Gothic fortifications used to be here. One mention from 1597 suggests deep cellars, but it isn\'t certain whether or not the building stood here at that time. From 1680-1682, a theatre was built next to the "Renaissance House". This evidently gave the building a new use as an operational facility fo the new theatre. At that time it was already in use as a wash-room and kitchen. From 1750-1752 it was rebuilt into horse stables by the Schwarzenberg builder J. Fortini, and a northern wing and extra story were added. The extra story was utilized as flats. From preserved documents, we know that the estate driver Jouze and the stoker lived here. The Krumlov prince\'s clerks lived in the Renaissance House flats up until 1947. 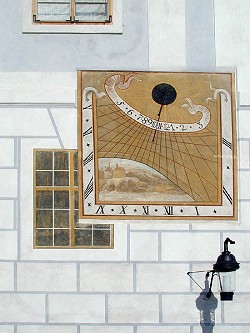