The castle was founded before 1250 by the Lords of Krumlov, one of the branches of The powerful House of Vítkovci whose emblem was a five-petal rose. Its foundation is closely connected with name Vítek junior of Krumlov who used the predicate - "de Chrumbenowe" in 1253. There is a written document mentioning the place called "Krumbenowe" in the work "Frauendienst" by aristocrat Ulrich von Liechtenstein.

The 2nd courtyard was originally called the Lower Castle with the Hrádek building. The Hrádek with a tower (a huge round fortified tower, 11.2 m in diameter, closely spanned with a fortification wall and a palace in the shape of a letter L). The Upper Castle with the collection of palace buildings were built later, in the second construction stage. The second construction stage is closely connected with Peter I of Rožmberk in 1330´s. Jan Muk and Luboš Lancinger´s opinions (constructional-historical research) about the Upper Castle foundation or August Sedláček´s opinion about the two castle centres existence in the 13th century are very rare in current literature. 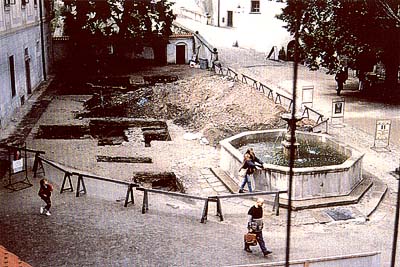 Archaeology is one of the scientific branches which can give us some evidence of the castle foundation and its history. It was acknowledged in the years 1994 and 1995. The archaeological research was done in the 1st and 2nd castle courtyard area. It was the first archaeological research in the present chateau area at all. It was done by the archaeologists of the Český Krumlov District National History and Geography Museum and the České Budějovice South Bohemia Museum.

The stone architecture remains - special means of production and ground design signs from the period of the castle foundation in the 13th and early 14th century were searched in detail in the 2nd chateau courtyard.

Huge dump layers dating from the first half of the 13th century were preserved on the sheer slope between the original rock headland top in the middle of the courtyard and the northern peripheral wall of the Mint. There must have been a sizeable stone fortified wall which caught the successive layers on its location. Another fortified part and the entrance gate remains were uncovered during the eastern courtyard archaeological research - bellow the Hrádek. The demonstrable 2nd courtyard fortification (the stone wall) had a significance of principle. The eastern site of the Upper Castle headland where the sheer carriage-way leads was originally about 10-15 metres higher than the 2nd courtyard surface. If the area had not been fortified too, the extensive and expensive bellow courtyard fortification would have lost its importance. There was the castle with two centres (the today´s Hrádek and the Upper Castle : map 1, 4) already before the end of the 13th century in Krumlov, and the fortified area in the size of approximately 1/8 hectare between them (map - 2, A). The fortified courtyard was broken with a gate with access onto the drawbridge in the eastern site (map - 6).

When the fortification had been built and the surface had been flashed with dumps, the metallurgical place of work originated in the southern site of the 2nd courtyard (map - C). The smelting works specialised in silver and gold production from the local poly-metallurgical ore. It had operated from the turn of the 13th and 14th century, and it became extinct only several years after its working. It ranks among the important European discoveries thanks to preserved apparatus relicts, its date of foundation and the significant of its location (The Český Krumlov Castle, the silver smelting works from the turn of the 13th and 14th century).

The castle fortification was doubled in the southern site - the Vltava River bank (map -8). The northern site fortification - the outer moat and the barrier had been gradually liquidated from the second half of the 16th century (map - 9). The ditch was deepened into the wide sheer ground between the two zones of the fortification (in the east), or left with no lay-out (the southern site). Both fortifications had operated until the restoration work done by the House of Rožmberk - particularly a two-wings building- the New Burgomaster´s House closing the today´s northern and eastern site of the 2nd courtyard.

A large number of objects demonstrating the mature culture of the castle and chateau lords and other inhabitants living in the Middle Ages was gained during the archaeological research. A numerous collection of pottery and iron objects was found in the filling of the medieval gate drainage canal. The collection of the Renaissance stove tiles was found during the one of the probing in the 2nd courtyard. The collection of the Gothic stove tiles (several thousands of pieces) was excavated fortuitously in 1918 bellow the castle in Jelení Gardens, and it ranks among significant evidence of the late Middle Ages handicraft in the 15th and 16th century.