Location :
The Summer-house Bellarie is situated between two tree wings on the west side of a small parterre that is situated at the garden´s cross axis. The elongated eight-sided building with an opened gallery on the floor marks the end of the double garden terrace.

Original name :
The summer-house was first mentioned as Bellarie on 31st March 1708.

Description:
The two-floor summer-house has an attic roof covered by shingles. The roof is also decorated by 2 copper vases and 2 dormer - windows with so called ox-eyes (oval window holes). There is marked use of a double winded stairway with forged railing on the south facade, and the summer-house´s facade is plastically divided by pink ribbonwork between the windows. Plaster window sills are decorated by white areas with motives running horizontally, while ribbonworks around the arcade windows of the upper gallery floor are decorated by scrolls. The flat and depressed parts of the facade are a grey dovelike colour. The upper part of facade is ended by a cavetto window sill. The stock of the summer-house, the upper rectangular terrace, is accessible by two framed stairways. The supporting walls of the terrace and stairways are divided by pilasters, while the balustrade along the terrace´s periphery and stairways is decorated by plaster scrolls. All plastic parts are white while the rest of the area is in dovelike grey colour. 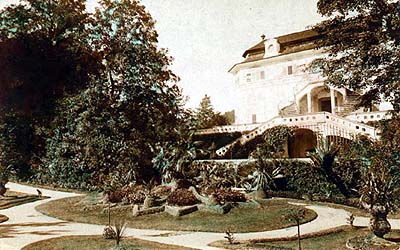 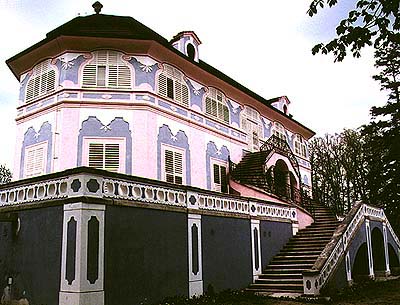 Historical development of the construction :
The predecessor of today´s summer-house, the pavillion on the elevated terrace by northwest wall of the garden, was created from 1690 to 1692. 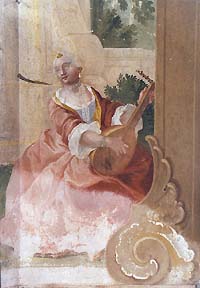 Václav Kouba, a stone-breaker from Záluží, broke into rock cliffs for the summer-house\'s basis in 1690. The rough construction was already standing by autumn and the accounts inform us that the roof was covered by 8000 shingles. The stuccoist Michael Bianco decorated the corners inside of the quadrature the next summer and created a monogram of the princely couple Johann Christian I. von Eggenberg and Marie Ernestine von Eggenberg on the ceiling. The building\'s gables were decorated with vegetable motifs and fruits.

In the year of 1692, the Český Krumlov\'s painter Melichar Hoffengut painted 2 dragon-shaped spouters in green colour and gilded them. He also painted 16 blind windows and marked them with numbers. Otherwise, there were 11 windows glassed with 1604 pieces of glass circles.

The next arrangements of the summerhouse were under the reign of Josef Adam zu Schwarzenberg.

An elevator was made for the transport of meals to "the magic table" on the ground floor in 1746, so that the guests wouldn\'t be disturbed by the domestic staff.

Salla terrena (artificial cave) in Bellarie was decorated with stuccos by Matyáš André in 1748 and was painted by Josef Lederer (the author of the Masquerade Hall painting on the castle) next year.

The summer-house was rebuilt in rococo style between 1755 and 1757. It was done probably on the basis of a design of Andreas Altomonte who adapted an original idea of the builder Fortini. While the lower floor of the summer-house remained basically unchanged, the second floor´s extension with an opened gallery changed the building into the spirit of Lower Austrian rococo. A possible prototype seems to be palace Horní Belveder of Euguen Savoy.

František Jakub Prokyš is the author of the hall´s paintings on the Bellarie\'s 2 overhead floors..

He created a painting of illusive architecture complete with vases, festoons and groups of Cupids on the upper gallery floor. The extraordinary airiness and lightness not only evoke a feeling of warm colour shades and continuous row of shutter windows, the entire space of the upper floor is optically open, especially upwards into the blue canopy of heaven with hovering angels holding garlands of flowers.¨

The painting in lower halls does not leave such an impression as it originally did. He created 7 allegorical pictures of free arts in the first, larger room, on which the couples of ladies and gentlemen display their interest in music, geometry, architecture and other arts. These scenes are composed into scenarios of gardens the motives of which were drawn from known model graphic arts from Augsburg. In the next room with the magic tble, the painter Prokyš "opened" the walls of the room using illusive painting into the garden, the society playing there attracting us.

In the following centuries, Bellarie wasn\'t touched with considerable reconstruction. Only the facade\'s colour and than the style of garden adaptations of the summerhouse´s surroundings has changed.

The summer-house Bellarie represents a rare and simultaneously very valuable rococo garden building to which we can only hardly search for a parallel in the Czech Republic. Unfortunately, this delicate and fragile building suffers in the neighbourhood of the robust and too technically expressive structure of the revolving auditorium.

Current use :
At the same time of the works on the new building of the revolving auditorium (finished in 1993), the works on the roof and the facade reconstruction of Bellarie were finished. The wealth of colours from the rococo phase of the building was reconstructed. 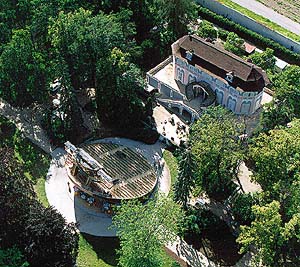 The underground spaces into the upper terrace of the summer-house were deepened, and these spaces are used as operational rooms for actors of the South Bohemian Theatre. Completion of the reconstruction still awaits the salla terrena in the basement and especially the halls on the first and the second floor, demanding the reconstruction of wall paintings.