Not too much time has passed from the time when the Český Krumlov Castle Tower echoed each hour between 9 a.m. and 4 p.m. with a triumphant fanfare, lasting from the 1st of May until the end of October. Over the course of time that old and pleasant custom, typical for Český Krumlov, was modernized and the proper trumpeter (a former member of the Castle Schwarzenberg guard) was replaced by a tape recorder with loudspeakers. But even this was discontinued.

Originally, the high Castle Tower trumpeters sent their fanfares into the four cardinal points and were well visible on the tower gallery. They were important guards in the past, guards of the tower who even lived upstairs in the heart of the tower during the day. Whatever the name of the tower guard was, they called him "Terner Nazl" as per the old local custom and called his regular playing, on an ordinary trumpet, a "Terner-Nazl-Lied". The other task, besides playing, was operating the Tower bells for various ceremonial occasions. Another unique obligation was also to inform Krumlov citizens about the possible weather of that particular day, done by hanging out various flags. A white flag indicated nice weather, a blue one forecast unsettled weather, and a red one signalled the coming rain. An approaching storm was announced by the tower guard setting out a blue-red flag. He would have certainly been very sharp-sighted to see the weather so far away. 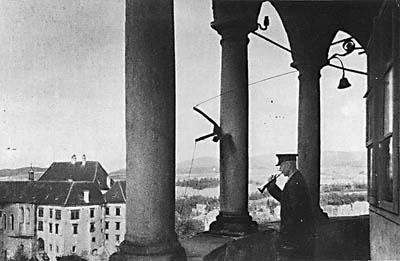 In the past the trumpeted fanfares from the Castle Tower also replaced the clock, due to the fact that it was more audible over long distances compared with the proper castle clock. As it was a part of the Český Krumlov atmosphere in the past, it should be undoubtedly arranged again with modern technical help after completion of the Castle Tower reconstruction.