The Vítkovci were among the oldest members of Czech nobility. The first information about them dates from the 12th century, mentioning Vítek of Prčice in 1134. In 1165 he was the senior waiter to King Vladislav I. In 1173 he was the Envoy of the same king to the court of Emperor Friedrich Barbarossa. In 1179 he fought in the battle of Loděnice between the "peasant duke" Soběslav II and another member of the Přemyslovci, Bedřich. Soběslav won the battle, but had to resign because of quarrels with the nobility, and subsequently Bedřich ruled the country. By this time, Witigo was probably a wealthy man and fought for him. In 1184 he became the Count of Prácheň and it is very likely that he used this as the reason to break through to the southern parts of the country that were owned exclusively by Czech dukes. 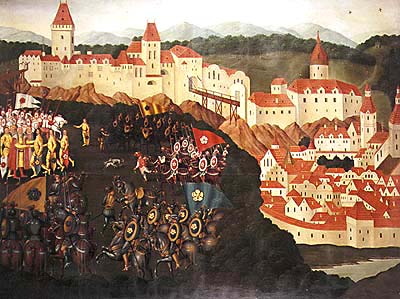 According to legend, Witigo had five sons. He divided his land between them and they founded new castles and estates such as Krumlov, Rožmberk, Jindřichův Hradec, Třeboň - Landštejn, Stráž nad Nežárkou and Sezimovo Ústí. This old legend is depicted in the picture in the Telč Castle and also its copies in Krumlov and Jindřichův Hradec. These show us how Witigo divided the coats of arms, each with a different coloured five-petalled rose, among his sons. The oldest, Jindřich, is given the golden rose on a blue background and is leaving for Jindřichův Hradec. Vítek z Klokot has a silver rose on a red background on his banner and goes to Třeboň. The ancestor of the Lords of Stráž departs with a blue rose on a golden background. Sezima, who was illegitimate, is also leaving for Ústí and carries a banner with a black rose on a golden background. Rožmberk and Krumlov are to be ruled by Vítek with a red rose on a white background.

The pictures, however, depict only a legend and are not very accurate. The castles painted there were actually founded much later in the 13th century, for example Stráž, around 1276. The other inaccuracy is that the Krumlov Witigonen was split in the next generation into two separate clans. They were already separated by Witigo\'s sons Vítek II referred to as the elder, who started the Krumlov Witigonen, and his younger brother, also called Vítek, who started the Rosenberg Witigonen. The third mistake is heraldic. The Krumlov Witigonen had a green rose in their coat of arms, not a red one, as the picture shows. The historical truth is, that Witigo had five sons :

In addition to these rich Witigonen, there were also younger Witigonen in Middle Bohemia. The Lords of Úpice and others are examples of this, but they never reached the historical importance of their richer relatives.

This legend arising from this historical event, is painted on the picture "Division of the Roses", which can be seen in the No. 1 Guided Tour of Český Krumlov Castle.