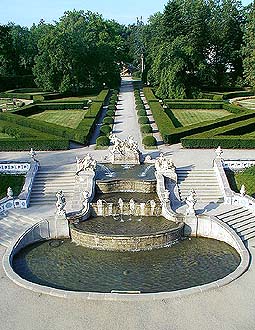 The Cascade Fountain is placed in the Castle Gardens in Český Krumlov. It is situated on the slope that divides the upper garden and lower parterre. The cascade fountain with statues of the water Deity, balustrade, vases and allegories of the four seasons crowns the front of the upper garden.

The plan of the castle´s garden from 1750, drawn up by princely geodesist Jan Jiří Planker, shows the area where the cascade fountain is placed today. The terrace of the upper garden was at the time marked off towards the lower parterre with a supporting wall ( the difference in elevation between terraces was less than 4 metres). This wall towards the upper garden was fronted by a balustrade while its front side from the lower parterre view was created by grassy slope. The balustrade was interrupted near the fencing walls by two coach ramps and a simple stairway in the line of the main compositional axis. The disposition of the lower parterre still showed that even up to 1750, early baroque parterre conception based on the principle of a star-shape arrangement of paths existed.

The construction of the cascade fountain began in 1750 according to a design of the Viennesse architect Andreas Altomonte, within the context of an overall transformation of the castle gardens over to Viennesse rococo style. The stone-cutting works were made from shell limestone brought from Eggenburg in Lower Austria by sculptor Matyáš Griesslern with the help and supervision of the sculptor and later princely garden inspector Jan Antonín Zinner (around 1708-1763). In the first stage the actual cascade with four levels with rich sculptural decoration was created, consisting of decorative vases and a dominant group of three statues of the Water Deity. The water for the fountain was brought by a wooden pipe from a pond in the upper castle (see castle waterworks).

In the context of Zinner´s previous activity in the service of prince Eugen Savoy in the Viennesse Belveder and on the Schlosshof castle, it is possible to suppose that a slightly older complex of cascade fountains in the Belveder garden served as a model for the Český Krumlov fountain. The castle gardens of Lower Austria from the first half of the 18th century absorbed and then creatively transformed the compositional principles of both classicist French gardens and the plasticity and richness of Italian baroque gardens. The cascade fountain took a dominant place in the front of the lower brodery parterre ( ornamental arrangement from low cut live hedges) complemented with another water motif - a couple of large octagonal ponds with fountains. 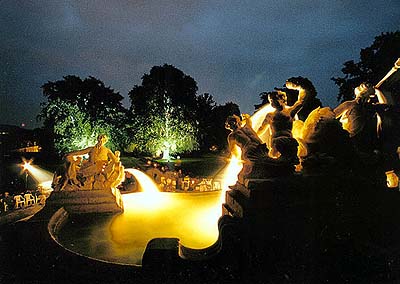 In 1762 a new balustrade was built 176.37 m long and 63 cm high on both sides of the cascade fountain. Twenty different decorative vases from Eggenburg limestone were placed there on the small wall sill along both cascade sides. Between 1765 and 1766 M. Griessler built stairways on the slope along both sides of the cascade. He created four sculptural groups representing the seasons by the path from the upper to the lower part of the garden.

In 1765 the original wooden pipes had to be changed. The short service life of wooden pipes created problems even later. In 1785 pipes from pine trunks were placed parallel in five rows. At the fountain they were led into cast iron pipes produced at Strašice´s iron works.

Goldfish-farming enjoyed a long tradition in the ponds of the cascade fountain - the first instructions for their breeding come from as early as 1781. 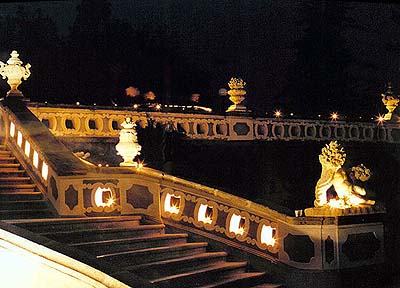 The maintenance of the garden in the second half of the 19th century was influenced by economical measures. Only in 1925 was the restoration of the vases approved on the balustrade by the restorer Jindřich Čapek and 1926 the restoration of Neptune´s sculptural group by academic sculptor Josef Vácha.

In 1931 the original clay insulation of the bottom of the lower cascade pond was replaced by a layer of concrete. The next restorations proceeded at the turn of the 1960\'s and 70\'s in the scope of the castle´s garden reconstruction. The balustrades were restored, the insulation was changed and the sculptural decoration was restored . As a consequence of insufficient maintenance the state of the cascade worsened and the sculptural decoration was extensively devastated. 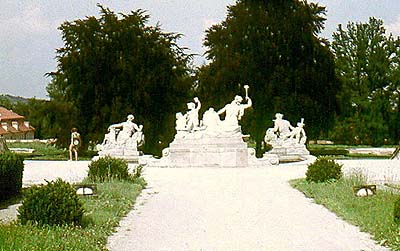 In 1990 the restoration of stucco ornamental decoration of the balustrade began. In 1996 the general Reconstruction of Cascade Fountain began with the intention of the important architectonic sculptural complex renovation that ranks among the most valuable objects of its sort in the Czech lands.