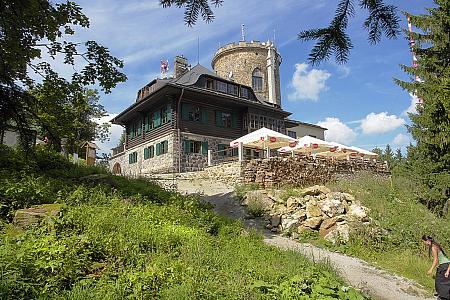 If you have already travelled the length and breadth of Český Krumlov, you can try a half-day or all-day trip to the summit of Kleť Mountain. At an altitude of 1,084 metres above sea level, it is the highest mountain in the Blanský Forest. After a hike, a bike ride or a chairlift ride, you will be rewarded with a beautiful view from a lookout tower – in good weather you can see all the way to the peaks of the Alps. Replenish your strength at the Horské chaty Kleť Restaurant with its famous garlic soup or another of the local specialities, and enjoy the return trip downhill on scooters.

You can travel to the summit of Kleť by bike directly from the centre of Český Krumlov. If you didn’t bring your bike with you, there are several hire facilities in the town. From the centre follow the yellow marked hiking route to Vyšný (2), then join the green route, which will take you onto cycle route No. 1166. After a moment, you will change onto route No. 1166 A, which leads to the summit of Kleť. Along the way, you can stop at Granátník lookout tower (3).