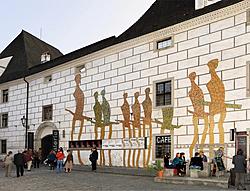 ALENA ANDERLOVÁ, CZ - INSPIRATION FROM THE CITY AND ITS SURROUNDINGS

The Czech painter Alena Anderlová has repeatedly stayed in Krumlov and we invited her to undertake a longer stay, wondering if Krumlov was still as inspiring a place for artists as it was in Schiele's day. Despite the fact that the town was full to bursting of tourists during Alena Anderlová's stay and her colleague Kateřina Šedá had just presented her project dealing with the overcrowding of UNES-CO tourist centres, the painter created a series of paintings that look visionary today as they show Krumlov touchingly empty, with only a few lonely people or animals.

The Japanese sculptor Tets Ohnari has also repeatedly stayed in Český Krumlov. He created fantastic granite objects in our studios (one of them can be seen today in the ESAC atrium, the other on the square in Hluboká nad Vltavou), a series of photographs inspired by the world-famous Schiele poses in Anton Josef Trčka's photographs from 1914, but also smaller wooden objects. This year, on the 100th anniversary of diplomatic relations between Japan and the Czech Republic, the Japanese sculptor has created a large glass installation depicting time flowing over the historic town of Krumlov and its inhabitants.

The exhibition by the Austrian painter Judith Zillich offers a very interesting approach to the nude, the semi-nude and to the choice of the model. More than ten years of work with one model is a time-consuming documentary about the model, but also about the painter and the relationship of these two neighbours from a Viennese building.