Fritsch Trail along the Vltava River 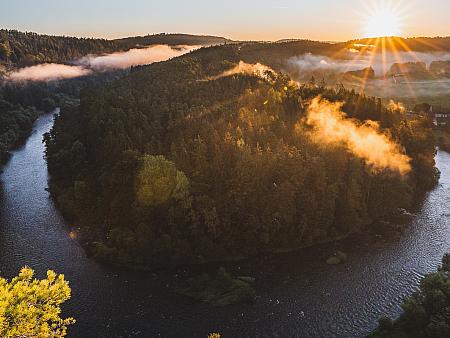 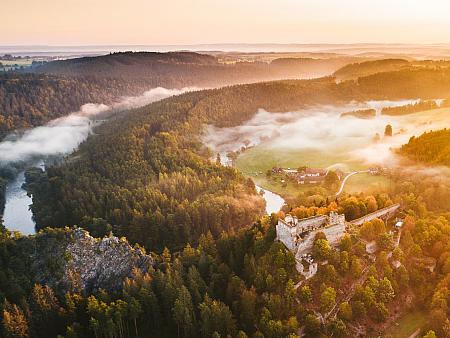 If you like hikes in beautiful, pristine nature, then take the Fritsch Trail from Boršov nad Vltavou to Zlatá Koruna (or a shorter route to Třísov). The trail leading upstream of the Vltava River was built in three stages in the years 1933-1938, some more demanding parts required the blasting of rock cliffs. The 18-kilometre-long but undemanding hike through the canyon of the Vltava River offers an experience of the non-traditional nature of the Blanský Forest landscape with views of the river and its surroundings. It will take you around the impressive ruins of the Dívčí Kámen Castle and near the Celtic oppidum, an iron age settlement, in Třísov. The start and destination of the route are located near the railway station, so we recommend taking the train.

or from Dívčí Kamen to Zlatá Koruna (+8 km) and from there by train to Český Krumlov (+6 km).

From Český Krumlov you will set off by train in the direction of České Budějovice (www.idos.cz), in the middle of the route you will get off at the Boršov nad Vltavou station. The Fristch Trail begins near the Boršov Information Centre, at the Church of St. Jakub, where you will find the first red tourist sign. Approximately 1 kilometre from the beginning of the trail, you can turn to the oval medieval fortress of the lords of Boršov from the 13th century, and to the monument to the pilot of the US Air force Cpt. R. F. Reuter. Continuing on the red route, after about 9 kilometres you will walk directly under the ruins of the Dívčí Kámen Castle. If you choose a shorter route of the Fritsch Trail, continue for about 2 kilometres to the train stop to Třísov, on the way to visit the Celtic oppidum. More able tourists can continue from the castle along the Fritsch Trail to Zlatá Koruna (approx. 8 km) and from there return by train to Český Krumlov.