Life and art in the Krumlov Monasteries 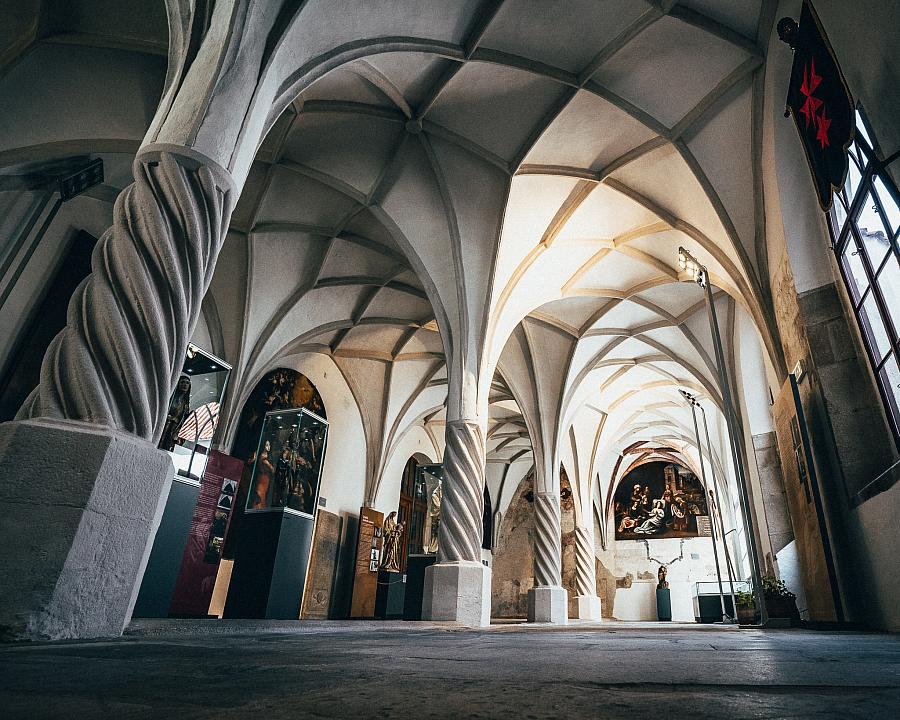 Permanent exhibitions provide plenty of space for education and entertainment for the whole family.

The former Minorite monastery, The former Clarissine Monastery
This exhibition introduces the architecture and art of this medieval double monastery, how religion spread throughout the world through missionary and diplomatic travels, and the life in the monasteries itself.

The former Minorite monastery, now owned by the Knights of the Cross with the Red Star, offers gems such as the St. Wolfgang Chapel, where original Gothic murals were found on the bottom part of the walls beneath all the mound and later layers, continuing with Baroque draperies and Art Nouveau ceiling depicting the life of St. Wolfgang.

The Gothic arches of the ambit provide a space for the uniquely preserved lunette painting cycle depicting the birth, life, and death of St. Francis of Assisi. From the original 25 paintings, 18 were restored. The paradise garden of the ambit was overbuilt with the Virgin Mary of Einsiedeln Chapel, gifted to the monastery by Johann Christian of Eggenberg in 1680. Even though the chapel is much younger than the monastery itself, it was built in the Gothic style.

Apart from the statue of the Black Madonna in the Einsiedeln Chapel, you can also admire a statue of the Krumlov Madonna, the Třeboň Madonna, and a painting of the Roudnice Madonna, located in the Clarissine monastery.

The former Clarissine monastery acquaints visitors with the life of St. Clare and everyday monastery life. You can see the contrast between the penury of nunhood and the ornate magnificence of sacral objects.

The entrance to the exhibition is from the Tramín courtyard, information and tickets can be obtained at the Visitor Center. The former monastery of minorities is barrier-free.