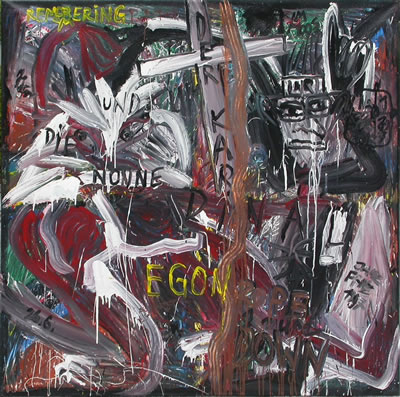 A selection of rarely shown and never before exhibited paintings by Professor Michael Rittstein from the 70s, 80s and 90s as well as the early 21st century. From the famous "Scenes from the Plattenbau (high-rise block of flats)" to the last imaginative paintings that were created in the Bohemian Forest during the pandemic. From private and public collections. Typical and atypical images. Classic and unusual techniques. Surprising motifs. Something to think about. For amusement. Take a tour of the exhibition and fly through half a century.

Thanks to the support of the Ministry of Culture of the Czech Republic and the Institute of Arts, the young painter lived and worked in our studios in Český Krumlov for three months in 2020. The cycle of mostly large-format paintings created here was painted partly in deserted Krumlov and partly at a time when Czech tourists had begun to return to the town. The painter complemented his visual perception of the empty town and later on groups of tourists with inadvertently overheard calls from the street, which he often used as the name of the painting or simply inscribed on the wall next to the installed paintings.

The Japanese sculptor Tets Ohnari has also repeatedly stayed in Český Krumlov. He created fantastic granite objects in our studios (one of them can be seen today in the ESAC atrium, the other on the square in Hluboká nad Vltavou), a series of photographs inspired by the world-famous Schiele poses in Anton Josef Trčka's photographs from 1914, but also smaller wooden objects. This year, on the 100th anniversary of diplomatic relations between Japan and the Czech Republic, the Japanese sculptor has created a large glass installation depicting time flowing over the historic town of Krumlov and its inhabitants.