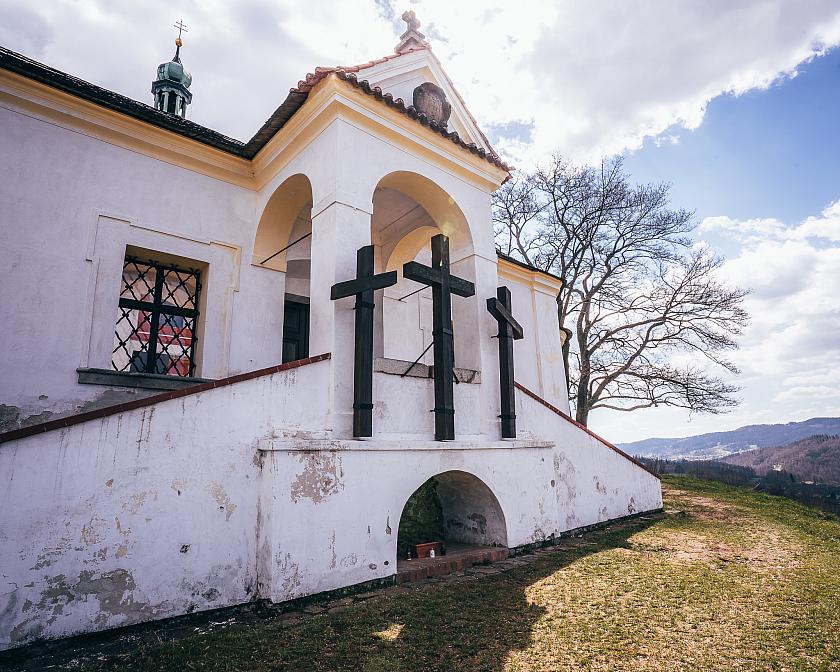 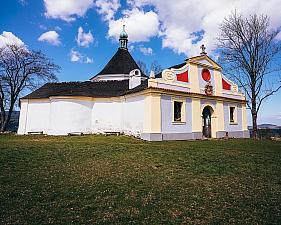 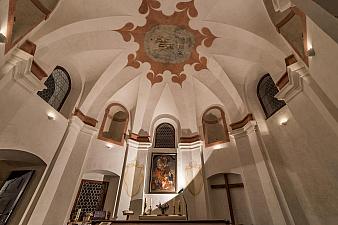 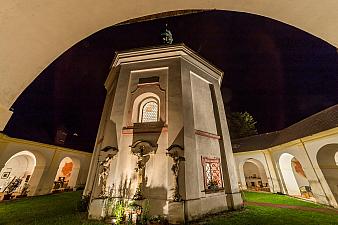 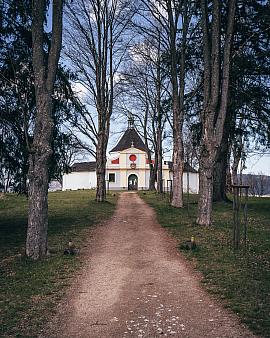 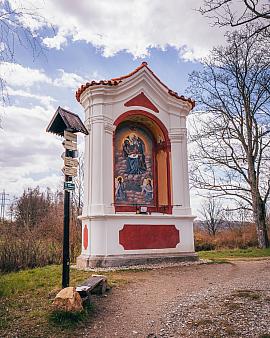 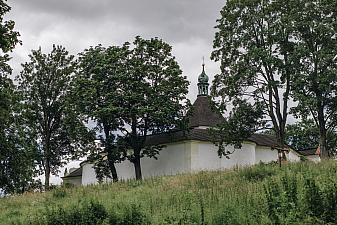 The Baroque Pilgrimage Site on Křížová hora above Český Krumlov is a commemorative religious, historic and cultural site with strong energy, romantic surroundings, and beautiful views of the town and the Bohemian Forest. All year round, it offers a number of cultural and social events, as well as tourist outings.

Outdoor panorama with binoculars: the most beautiful view of Český Krumlov and the Bohemian Forest

The Chapel: it has been consecrated at least 3 times, and for that reason, it represents a charming religious space which is the venue of a ceremonious singing mass in Latin on the occasion of the day of the Chapel of “the Exaltation of the Holy Cross” on 14th September or on the nearest Saturday.

Community centre in a former hermitage (i.e. an 18th-century dwelling of the site’s caretakers), film screenings – DVD, TV – Noe, viewing and lending of books, paintings. We turn the heating on during winters and thus our pilgrimage site serves also as a “cosy mountainous den” for all winter pilgrims and visitors.
Kids’ Club: colouring books and painting, children’s books
Tourist corner with maps and newsletters, documents for water-sports enthusiasts and tourists

It is a typical Baroque pilgrimage area commonly built across Europe at the turn of the 18th century. Visitors often liken it to Santini’s Pilgrimage Church of St John of Nepomuk at Zelená hora even though from the perspective of the size, those two constructions are quite understandably incomparable.

The heart of the area at Křížová hora (the Mountain of the Cross) is an eight-nave chapel built in 1710 surrounded by green surfaces and an eight-part arch (a covered pilgrimage corridor) with arcades. The arch was constructed subsequently between 1715 and 1720. A Way of the Cross with six Stations of the Cross from the years 1750-1755 leads to the pilgrimage area.

The Chapel and the entire area were built upon the initiative of the burghers of Krumlov in compliance with the then reigning John Christian I of Eggenberg and his wife who regarded Křížová hora as a magical place. Over more than 300 years of its existence, the pilgrimage area has experienced both good and bad times. The good times permeated especially the 18th century – the times when the area beamed with Bohemian religious life. The bad times, on the other hand, came at the turn of the 20th century, as well as with World War I – the times of significant decay of the whole area. In 1928, the Chapel on the Mountain of the Cross was purchased by Terezie Schwarzenberg who had the building repaired at considerable cost. The worst times, however, came after 1950; during the socialist regime, the grounds, along with the interior furnishings, were destroyed and misappropriated. Following the Velvet Revolution, the year 1991 saw a thorough reparation of the Chapel; the grounds, however, remained empty and practically sealed off to the public. (source: www.krizak.ckrumlov.cz)