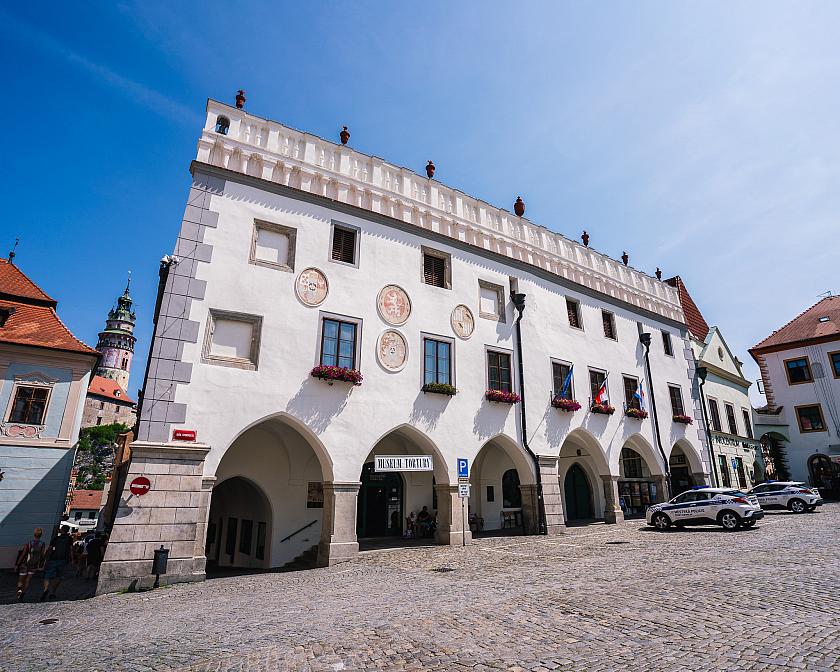 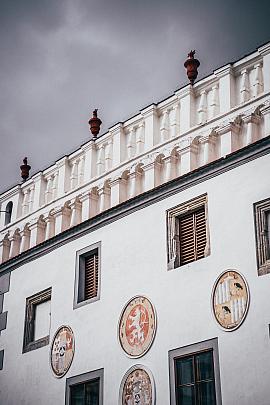 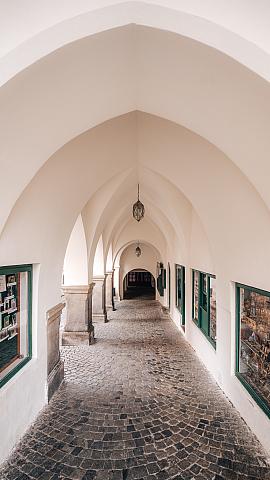 The town hall with the address Svornosti Square No. 1 has been operating at this address since 1597. In the 16th century, several Gothic houses were joined here to form a single unit, the facade of which was joined by a Renaissance parapet. Nowadays, the Municipal Office, the Municipal Police and the Museum of Torture are located here, while the neighbouring building No. 2 houses the Infocentre (where the first town hall in Krumlov was located until 1519).

According to the ground plans of the city that were drawn in the 14th century, construction on this plot of land first took place around the year 1300. The ground floor front arcade was added to the building at the decline of the Gothic period. In the second half of the 16th century, the two (or perhaps even three) separate Gothic buildings (the original town hall and a burgher´s home) that stood next to each other on this plot were joined together. The interiors of the buildings were connected and the Renaissance parapet was added to exterior front facade to give building a more unified appearance.

courtyard area and was added during this Renaissance renovation project, as well as the groin vaults in the main entrance hall (before the year 1564). In 1796, the parapetted attic wall was remodelled to its present-day Classical style and further alterations were made in the 19th century, when this parapetted wall was shortened slightly. During an extensive reconstruction project that took place in 1924, the arcade that had been formerly enclosed was opened up and the emblems on the front facade were revealed. From 1938 - 40 the courtyard section with meat stalls was demolished and the present - day interior was executed.

The entranceway to the interior of the building is marked by a Gothic, pointed arched portal. The symbol of the Rosemberg family, the five-petalled rose, is painted in the space above this portal. To the left of the portal, there is a fragment of a Gothic window with circular tracery. The entrance hall with rounded and ridged vaults contains fragments of two Gothic portals with cross-hatched design work. In the hall on the first floor there is a modern-day joisted ceiling which is supported on its edges by brackets. The vaulted cellars which date from the Middle Ages, lie under the majority of the building and are predominantly constructed of stone.