Krumlov is not just architecture. Discover its gardens and parks 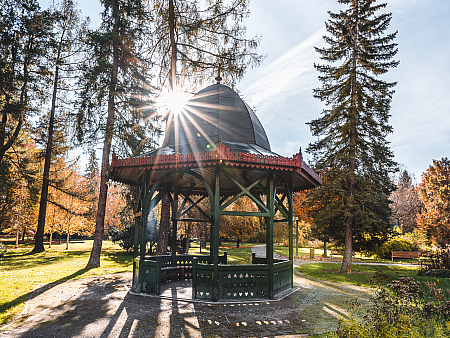 The park with an area of ​​about 2.5 hectares is located in the centre of Český Krumlov, on the left bank of the Vltava River. It is a 5 minute walk from the square via Kájovská street or "Myší díra“ ("Mouse hole"), over the dr. Eduard Beneš bridge and then to the left. Not only you, but also your children will enjoy a walk in this park - a large playground is awaiting them within the park area. In summer, they can play in the shade of trees or refresh themselves in the river at the newly built water access.

The area of ​​the park as we know it today used to fulfil the purpose of a relaxation place and a garden for the Jesuits from end of the 16th century. Extensive changes in modifications and use took place at the turn of the 19th and 20th centuries, when the so-called Jesuit Garden became municipal property. In 1885, for example, a river swimming pool was established on the banks of the Vltava River. A playground used as a summer training ground and as an ice rink was created around round 1900. The entire area was later landscaped in 1908.

We can find many remarkable wood species here today - trees and shrubs, coniferous and deciduous, common and exotic. The park greenery is complimented by free-standing sculptures and several interesting buildings. The wooden music pavilion built before the First World War and serving its purpose in the 1950s should not be overlooked. When taking a stroll through the park, do not forget to visit the chapel of St. Martin from 1717 with Baroque furnishings and decorations. A cemetery used until 1892 also used to be near the chapel. 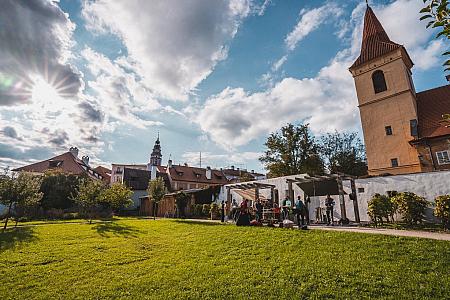 The gardens of the former  Minorite monastery - the oldest preserved gardens in Český Krumlov - can also be found in the historic city centre when you  walk from the main artery Latrán to the monastery complex through Klášterní Street (opposite the entrance to the first castle courtyard). The Minorities established these convent and a vegetable gardens, where they also grew medicinal herbs, shortly after the founding of the monastery in 1350.

The convent garden was leased to the townspeople of Český Krumlov at the beginning of the 19th century. The Minorities were expelled from the monastery in 1950 and the former monastery gardens took on the role of allotment gardens.

The town of Český Krumlov opened the monastery complex to the public in 2015, after five years of reconstruction, including the gardens. In addition to their extraordinary age, their value lies in the centuries-old tradition of horticultural cultivation of medicinal and useful plants, vines, fruit trees and vegetables. The intention to present the richness of the horticultural tradition of monastery gardens was also one of the motives for their transformation.

The collection of plants in the garden is used for educational purposes. Vine was planted here again with the first harvest in 2017. There is also an insect hotel on display, presented by a miniature of the monastery. The replica of the original gazebo - part of the monasteries’ bowling alley - can now be found in the lower part of the garden.

Nearby attractions: expositions and craft workshops in the area of ​​the Monastery complex, the brewery, the Red Gate, the Ist castle courtyard, Latrán, Vltava River bank

The name Jelení (Deer) Garden has been documented since the 18th century and it illustrates the original garden function as a game-park. The park, familiarly called Jelenka by the locals, covers an area of ​​seven hectares and is located at the northern foot of the castle slopes, in a wide strip of floodplain of the Polečnice river. Its central part (with a car park and the building of the former so-called šiškárna – a cone house/ seed separating facility, today the Jelenka restaurant) is located on the site of a former Renaissance garden.

Trees grow on the northern slopes between the castle buildings and Chvalšinský stream lea, and are a mixture of broad-leaved trees with rich shrubs.  The eastern left-bank part of the garden along Chvalšinská street is a free grass field with scattered solitary trees and tree groups.

In the summer of 2020, a new nine-hole disc golf course for beginners and slightly advanced players was created in the garden. The playground is designed with careful regard to other activities in the area, both in terms of walking trails and the adjacent bike path.

Nearby attractions: Budějovická Gate, Luna Cinema from the 1970s, Masarykova Street with development from the First Republic era, Cloak Bridge 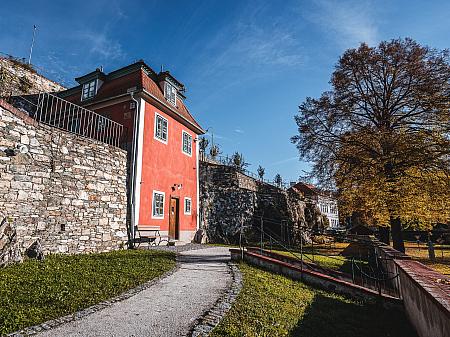 This place in the southern meander of the Vltava River is another of Krumlov's oases of peace and greenery, a refuge with fresh air and little sports activities for the little ones in the form of a children's traffic playground, in the summer in the shade of mature trees.

The little house on a terraced hillside was built during the Neoclassical building boom around 1800. In 1911 the painter Egon Schiele (1890-1918) lived and worked here. Willi Lidl, a pupil at the local grammar school, found the house for Schiele, negotiated the lease and requested the undertaking of a series of repairs and modifications. Thanks to the helpfulness of the owner at the time – a dry goods merchant called Max Tschunko – Schiele was able to live here for free. He painted Krumlov motifs in oils on wooden panels; thus creating such famous pictures as Town on the Blue River, Dead Town, Krumlov by Night or View of Houses and Roofs of Krumlov.

Egon Schiele loved the house and the flowered terraces. The terraces are still full of flowers and vines. In the summer you can sunbathe and swim in the Vltava on the grassy patch in front of the house - a gradual access into the river is tempting and safe.